She always was straightforward. I felt her square her shoulders and take a deep breath. It made the buttons strain, just a tiny bit.

"Hal." She looked him right in the eye.

He was always perceptive. He didn't give her a chance to go on. He just said "I thought so." There was that half-grin, and the accompanying shrug. His hands in his pockets, not fidgeting, just there.

"Why didn't you say anything?" Her hands smoothed the front of her skirt. If she had been a nervous person, that would have been her nervous habit.

"Just not your gentleman." His grin lurched to the other side.

"A gentle man, all the same." Her hand lifted, almost to his face. He caught it and pressed a kiss into her palm. She didn't pull away, but he let her hand drop.

"Well, then. I'll let myself out," he said. She stood still, and when she said "Hal" again it was to the empty room. Three whistled notes came through the window, then died away, the phrase abandoned.

Pansy: It's awesome to be us.

Daisy: TELL me about it. I mean, look at us. Me in particular. Awe. Some. Some serious awe goin' on here.

Iris: Although, I think it's more awesome to be me and Pansy than you, Daisy, because, frankly, we have better shoes. We are totes awesome-er.

Daisy: I have a kickass bag, though.

Daisy: It may be slightly more awesome to be me and Iris, Pansy, because we don't talk like a passé beer commercial.

Iris: Whatevs. Remember when we used to be aMAZing? I kind of miss aMAZing.

Daisy: Whatevs. We can leave it as given that we're all awesome. Until we decide that we're fabulous, of course.

[This awesome pattern is from Penny at Antique Dollhouse of Patterns. Awesome.]

Yes, those are little orange and green books on a black background! Isn't that adorable? I bought it on eBay yonks ago — I bought it actually while sitting on a plane (thanks, GoGo Wireless!) and yesterday I was ALSO sitting on a plane, which reminded me that I'd never posted about this fabric.

I don't have a ton of it — four yards, maybe, but it's vintage fabric so it's very narrow, under 42 inches wide. What would you do with this fabric?

I'm completely in love with this skirt pattern (New Look 6981). Here's the line drawing (I'm not showing you the photo illustration because I find it cringe-inducingly hokey):

I'll post some pictures soon of the two skirts I've made from this pattern so far — and I'm sure they won't be the last, either. This skirt is incredibly comfortable and goes together like a dream. Sewing at top speed I bet I could get one cut and sewn in a couple of hours, and that includes using an invisible zipper (instead of the regular one the pattern calls for) and adding on-seam pockets.

It's a really cheap pattern, too — you can get it for under $5 — and very efficient in terms of fabric use. (I'm going to go through my large bin of "pieces of fabric too big to toss yet too small for an entire dress" and see what skirts I can eke out of leftover yardage.)

So far the ones I've made have been in heavy denim, but I also just bought some velveteen that I am dying to sew up … and this would be really cute in lightweight cottons with the heavy contrast border. Do I sound obsessed yet? It's trending that way …

Denise at the Blue Gardenia is doing a series on Sewing Spaces on her blog, and I'm entranced.

I promised her I'd send her my writeup soon, but in the meantime, you should check it out.

I am pretty sure there's a recognized psychological disorder where the sufferer believes that he or she is actually a fictional character, living inside a novel, and subject to the whims of the author. I can't find the name of it, although while looking — no research effort is ever truly in vain — I did turn up the (really disturbing) Cotard delusion. (And thinking about the reverse, people who think they're real but turn out to be fictional characters, reminded me of one of my favorite SF stories, "You're Another.")

But anyway.  Last Tuesday afternoon I came to the realization that I am not (in fact) an actual person, but a character in a William Gibson novel.

I came to this realization while reading Zero History. I was sitting on a plane, en route to a "Big Data" conference (!), having been unexpectedly upgraded to first class (!!), reading the book on my iPad (Apple fetishization — very Gibson). I'd downloaded it at the gate at the last minute, when I found out there was no wifi on the flight. I was wearing a new skirt. It was blue digital camouflage, and I made it myself. (Gibson enough for you yet?)

It was the new skirt that tipped me off to my unreal status. Camo and the blending of military and street fashion is a — I don't know, not really a theme, but maybe a motif — in Zero History and there I was, deeply immersed in the book, when I shifted in my seat, glanced down at it, and realized that I wasn't a real person, but just a Gibsonesque character.

I mean — really. Look at the evidence. Gibson's characters are post-fashion: they're defined by being post-fashion. Sometimes the plots are driven by the process of discovering what it means to be post-fashion and post-brands (but never post-style). They're insanely picky (well, insanely picky compared to people who aren't Gibson characters) about what they wear. They have self-imposed uniforms; they hate logos. (I make my own clothes, in part, because I hate logos.) They're obsessed with certain iconic brands. They scout for long-discontinued items on eBay.

Gibson's characters, if not digital natives, are usually digital immigrants, living a sort of twilight existence between the online and the off. (How are we interacting RIGHT NOW?) Are you sure I'm real? Video of me could be faked, these blog posts created by some bored AI, all sorts of traces inserted stochastically deep in those layers of the internet which are rapidly turning into digital peat …

You'd think that I'd be disturbed by this, but I'm really fine with it (as a Gibson character would be, after the initial freakout). I mean, it could be worse: I could be a character in a Dan Brown novel, right, or in some book with "Shopaholic" in the title? And Gibson's books do mostly have happy or happy-ish endings, after all.

(Weirdly, my sartorial obsessions began in 1983-4, right around the time Neuromancer was published. That's when I learned to sew and also when I became fixated on penny loafers, initially classic Bass Weejuns. )

I haven't finished Zero History yet, but I'm very close to the end, and there's not really time for me to make an appearance before the denouement. Maybe in the next book … I'm really looking forward to meeting Bigend. I hope he's still wearing that blue suit.

I know crochet goes 'faster' than knitting, but the title of this booklet strikes me as incredibly optimistic. There's no way that I could get that on my table tomorrow. (It usually takes a good 24 hours to clear off all the stuff that's there already, anyway.)

And, of course, when I think "FUTURE" what immediately springs to mind is "crocheted tablecloths!" That's why all my robots have handy in-chest dispensers for reels of cotton and come with #5 hook attachments.

If you have quite a few tomorrows to devote to creating intricate and lacy tablecloths, this booklet is available from Lanetz Living. When you've finished, jump in your time machine and come show it to me! I'll expect you tomorrow at 4. We'll have tea!

Polka Dots: Are you sure there’s a bee in my hair? I don’t hear anything.

Polka Dots: Why do I have to hold my hand like this? It’s starting to hurt.

Blue: Do you want to be stung? Just a little bit longer, I can almost see it …

Green: Dammit, I can’t believe Blue has gotten her to hold still for five minutes! I’m going to lose my bet!

You can find this pattern (and lots of other ones) at Lanetz Living.

You regular readers of the blog know about my obsession with Lands End cardigans; as a result of that obsession, I get a catalog from them about every 2.7 days. Environmental degradation aside, the catalog (they have a new stripey gray cardigan!) drove me to check out the web site today to find that everything, including the clearance section, is 25% off through Labor Day (Tuesday Sept 7 for those of you not in the US).

Which includes this skirt: 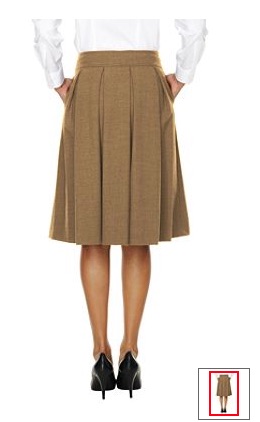 It's only $29.99, BEFORE the discount, and it's wool! And (as the picture above seems to suggest) it has pockets! (It also comes in charcoal gray.)

I never buy a ready-made skirt unless it's cheaper than I can buy the fabric to make it myself, and this passes that test: I couldn't buy this much wool flannel (in non-weird colors) for $30. Just not possible. (Also, this skirt is lined.)

There are no reviews of this skirt on the LE site, so it's entirely possible that it's made of a special blend of wool, spandex, and unflatteringlon, but hey, wool skirt for under $30! I could wear it just on cold & rainy biking days and still feel I got a bargain.

LE sizing is on the generous side, so be sure to check the size charts before ordering. (I regularly drop two sizes in their stuff.) Most of the petite sizes in the camel still seem to be available as I write this, but it's in the clearance section, so, no promises.

This skirt is cheap enough so that you could even buy one for experimentation — the camel would be cute with brown or green velvet ribbon trim or appliqués, for example — although that would ruin the "junior teacher in an exclusive girls' boarding school" appeal that the unadorned skirt has … your call, either way.