I finished this dress up last weekend: 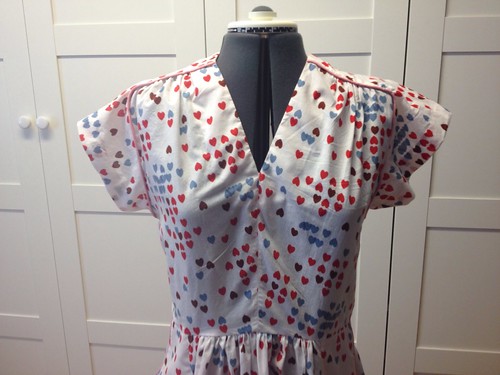 This here is the part I like best. I was going to do plain red piping, but the reds didn’t match. (And neither did the maroons or blues. I have more piping than a Scottish funeral.) 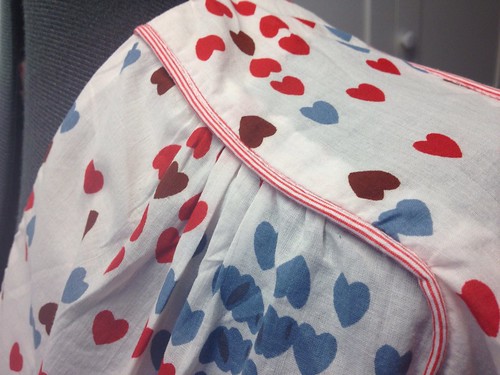 The striped piping is from Britex. Every time I go in I have this little surge of hope that they’ve decided to carry even more patterned cotton piping, and then I see that the choices are basically pinstripes, leopard, and neon. I’ve bought all the stripey ones; I’m just not really a leopard-print kinda gal; but I’m sure someday I will manage to avoid the gorge-rising nausea upon seeing neon colors that the early 1980s left me with and you will see some fluorescent pink piping here in these pages. 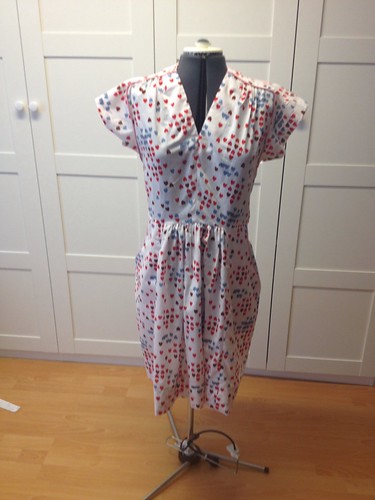 I suppose at this point I should mention that the bodice is Simplicity 2389 (again) and the skirt (for a change) is BurdaStyle Heidi with some alterations.

What alterations? Well, I added 6″ to the skirt center back and front, and lengthened the skirt by about 8″ to ensure a deep, deep hem. I really like this version of the Heidi skirt — it’s very comfortable, and for some reason manages to cohere with the 1940s bodice and feel modern at the same time.

I piped the back yoke seam this time, too: 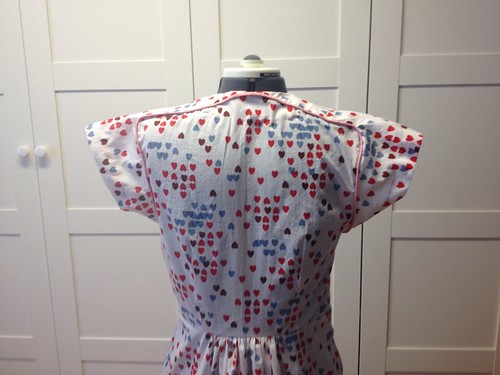 Except I forgot that the yoke has to meet the facing at center back and had to kludge in a little bit more piping. Also, the back facing DID NOT want to turn nicely over that piping bit, so I finally just said “this is a design feature” and left it at that. 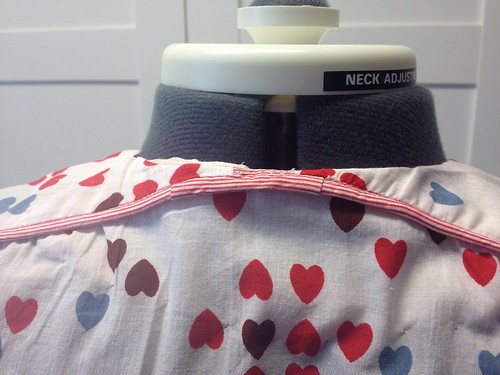 Here you can see the piping meeting at the underarm (probably another reason that piping the back is not as good an idea as it might seem), as well as the pocket piping and the zipper: 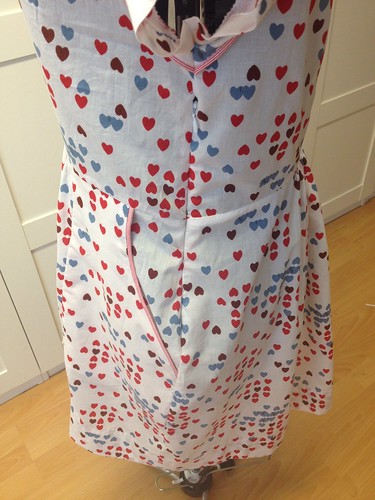 The whole back view (I’m not sure what was up with the lighting when I took these, weekends have been fairly sunny lately): 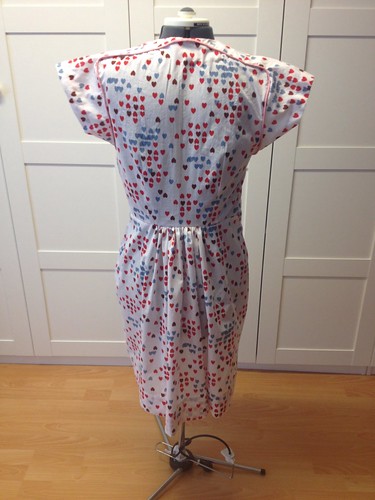 This voile is lighter than I’m used to, so I thought I might have to line it. Instead I settled for a heavier slip than usual and cutting the pocket lining and neck facing from this weird pale pale pink linen/cotton voile I had lying around. Since I’m mostly pale pale pink too, it seems to work. I have another one cut out where the fabric really was translucent, so I ended up underlining it in black voile, which is creating a kind of goth-flavored mallard color effect (that fabric is teal).

I ended up wearing this to a Javascript conference last week — I hesitated a tiny bit about wearing something so flat-out girly, as the gender ratio at these things approaches that of your typical offshore oil rig and/or professional football team (only with more ironically-worn mustaches and skinnier jeans). But it wasn’t as if I was going to magically become any less of an outlier in a plain denim dress (choice #2) than I was in this one, and since I hadn’t really worn it yet (and really wanted to), on it went.

Honestly, since I’m not looking for a job, I have a whole lot less risk in wearing something super-girly at tech conferences. And if I wear something like this, I can set some kind of upper bar and make other people look moderate in comparison, and gradually move the whole bar of “conference wear” further in my direction, right? That’s the plan, anyhow.

It was a total luxury to be able to go to this conference, by the way. I’ve been dabbling in Node.js for a bit and have finally reached the stage where a tiny archipelago of scattered knowledge is emerging from the receding seawaters of my ignorance. However, I am still looking for navigable channels between the islands, and a conference is one of the fastest ways I know of to connect the dots.

There’s something about going into a talk where you know nothing about anything in the description, grabbing onto the first idea tossed out by the presenter that connects to anything you know, and following along, knot by knot and intersection by intersection, until you have a lovely net with which to catch the entire topic.

Usually when I learn anything new it’s like taking the Tube in London: I get on at one subterranean stop and clamber back up the light in a completely different place, and couldn’t for the life of me say how to get back to the first stop overland. Going to a conference is like riding around on the top of a bus: I can finally see how all the different neighborhoods join up and how to walk between them. And coding is such a lovely city …

Claudette: My left, or your left?

Claudine: Might as well put it down before you get dizzy from the rubber cement fumes.

[Pattern is here if you want it. Thanks to Tammy O. for the suggestion!]

When you’ve been sewing for as long as I have (30 years!), it can be hard to discover the gaps in your own knowledge. You have your own routes to the places you need to go, and time doesn’t always (or even usually) permit the kind of aimless wandering that leads you to new discoveries.

(subtitled: A complete guide to machine-sewing and hand-stitching techniques), my thought was that it would be a great entry-level book to suggest to people just getting into sewing.

I wasn’t really wrong … I was just thinking too small. Super Stitches Sewing

is a great book for people just getting into sewing, but it also revealed to me a huge blind spot of my own: turns out, I have been ignoring about 70% of what my sewing machine is capable of.

When I first started sewing, I used a machine that had a straight stitch and a zig-zag, and a buttonhole stitch that could charitably be described as “cantankerous”. My second machine was at about the same level of sophistication (albeit with a buttonhole stitch that could be described as “temperamental”). My third machine was a 1950s throwback (with cams that, while cool, I never really bothered to learn to use). So when I moved up to a brand-new machine that added a blind hem stitch to my repertoire, I patted myself on the back for joining the modern age. “Whoo-hoo, now we’re cooking with gas!” I believe I said.

As it turns, out there is SO much more I could be doing with the stitches on my machine (even leaving aside the alphabet-embroidery stuff that I’ve used exactly once). Machine darning! Sewing on buttons by machine! Shell stitching for scalloped piping! And pages and pages of stitches that might just be the key to me finally starting to sew with knits.

And I haven’t even mentioned the hand-sewing section yet … which even includes pad-stitching instructions for those of you interested in classic tailoring techniques.

So: in short, Super Stitches Sewing

is a great book, highly recommended. Even if you’re a machine maestro, the simple instructions and clear illustrations make this worth keeping on hand as reference.

This dress is all about the piping: 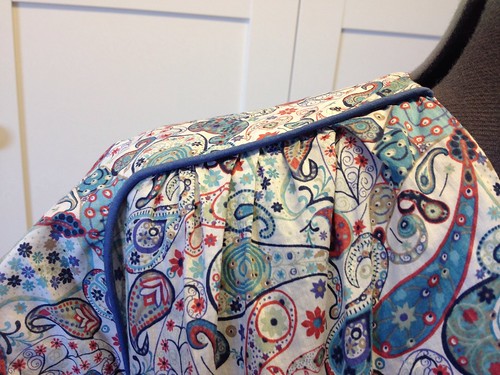 Okay, it’s also about being in one of my all-time favorite Liberty prints, Mark, but mostly it’s about this gathered-shoulder silhouette: 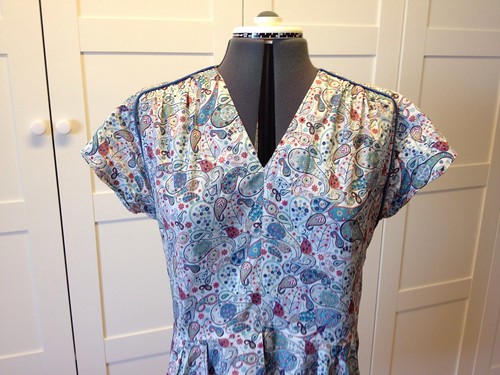 And if you’re going to pipe the shoulder seams, you must pipe the pockets as well (it’s the law): 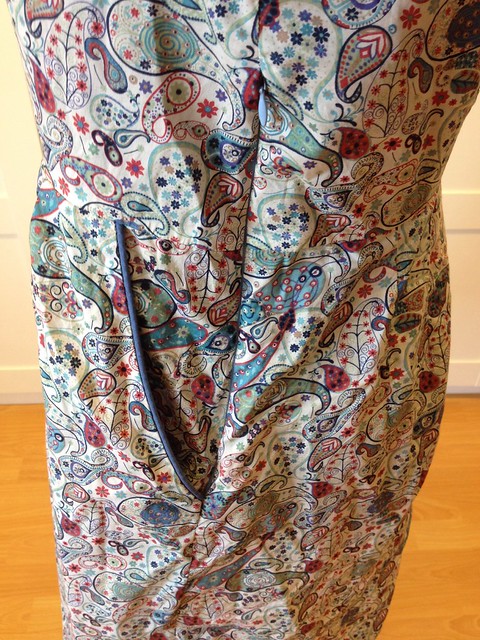 The shoulder piece makes this really nicely satisfying curved seam at the back neck (ignore my rolling-facing issues): 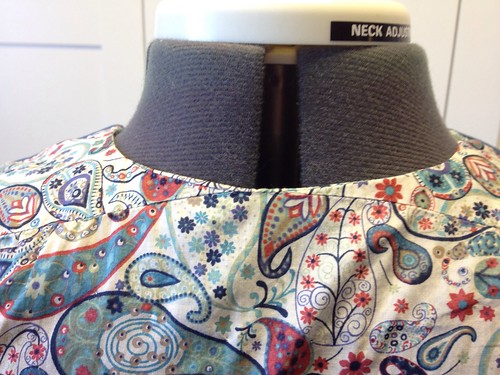 The shoulder/sleeve has a turnunder for hemmish purposes, which is a feature I always like. Makes things simpler: 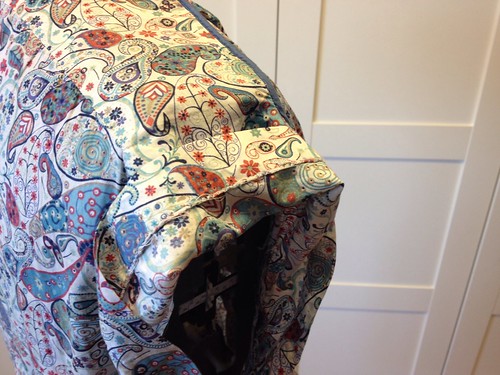 Here’s the back view, a bit wrinkly as I wore this for a few hours before taking these pictures: 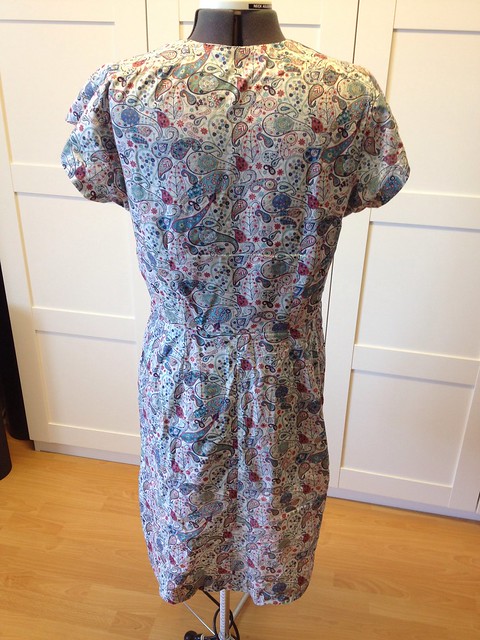 Last but not least, the full front view: 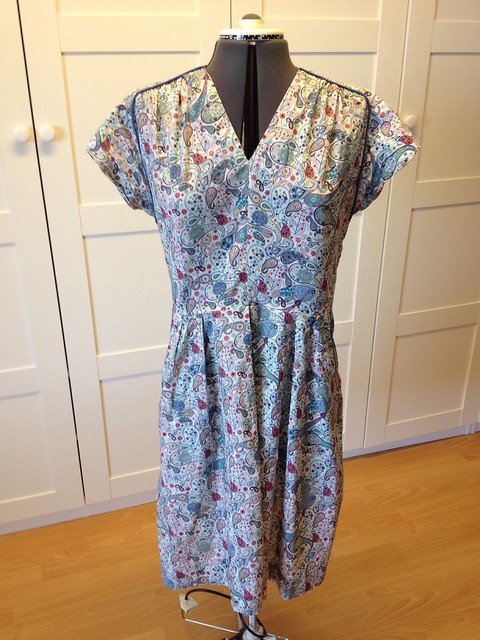 This pattern is Simplicity 2389 (well, for the bodice, the skirt is that much-adjusted Simplicity 5238). (All rollover text in this post from the Piping Design Handbook.)

There’s still something wonky going on with the side bodice seams, and the fabric is a bit light for the deep front pleat, but I really like this dress. It’s very light and comfortable without feeling skimpy (although the front V is slightly lower than I usually wear). The sleeves are great for full range of motion (have you realized that too-tight armholes are one of my pet peeves, yet?)

There’s another version of this in a heart-print voile, that’s in pieces on my sewing table — hope to have it finished and posted soon.

Here’s a more true-to-life (or at least, true to the pattern illustration) version of Simplicity 5238: 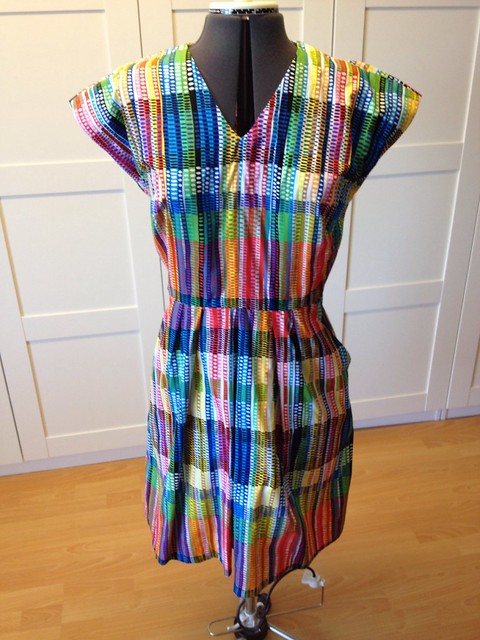 I actually bought this fabric yonks ago. I bought it in early autumn and thought it was too summery, and then it suffered from a lot of being “too” other stuff, as well. It was too heavy for a regular shirtdress, and then too stripey for some patterns that would have required more matching than my laziness allowed, and then once I started playing with Simplicity 5238, I was all, “hello there, sorry you’ve been languishing in the back of the fabric closet, time to come out and play!” 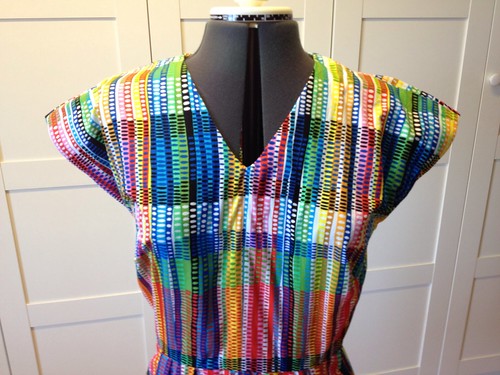 Even though it is VERY stripey, it’s not too bad to match with this pattern: 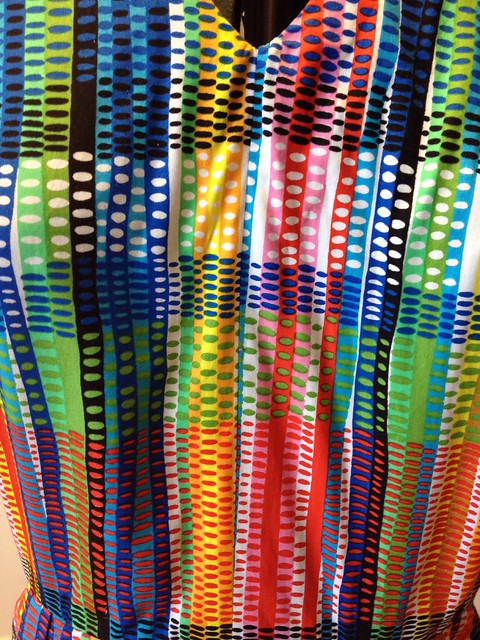 The major departure from your bog-standard Simplicity 5238 is the addition of front slash pockets, of course: 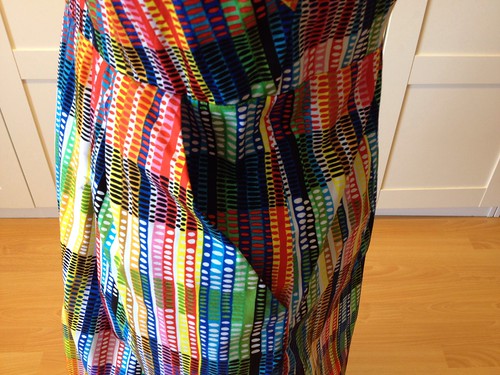 I’ve decided, after a few iterations, that center back zippers are horrible. At least, my implementation of this one is: 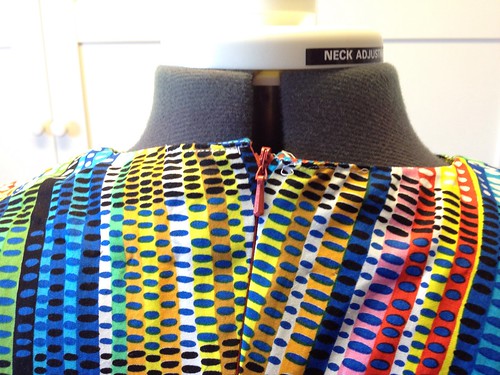 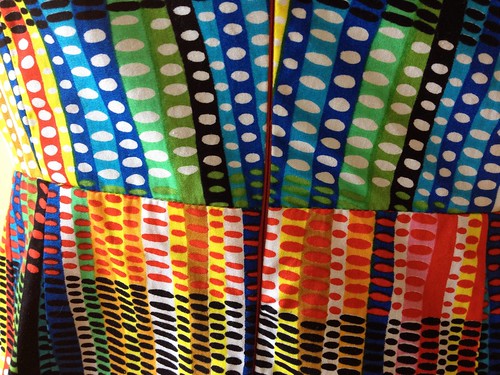 The stripes did something interesting (I’m CALLING it interesting, therefore it is INTERESTING and not ‘off’) on the back bodice: 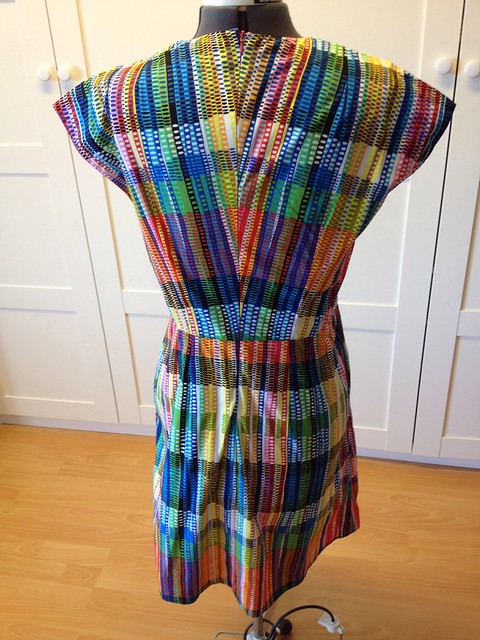 I’m also telling myself that the V there makes my back waist seem smaller (although honestly, I gave up really trying to optically-illuse my Actual Body™ away ages ago) and also that nobody will notice the weird hiccup at the bottom of the zipper because the pattern is so darn busy.

I ended up calling this the Cinco de Mayo dress because I coincidentally wore it for the first time on Cinco de Mayo,  running errands in the Mission, so I got a  lot of very nice compliments on it from people who were, for the most part, only MILDLY inebriated. I believe this would an excellent dress to attack a piñata in, should you be so inclined — the armholes are very deep, so you should be able to get some good whacks in without worrying about tearing out a sleeve. Also, you’ll match both the tissue paper AND the candy. 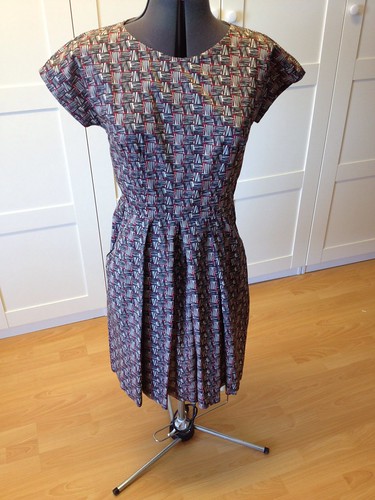 So this is the same pattern (or lack thereof) as the last dress, only in this Liberty fabric that I adore. Look, they’re little matches! (It’s called “Strike” and Shaukat still has some in the green colorway which is *almost* as adorable.) 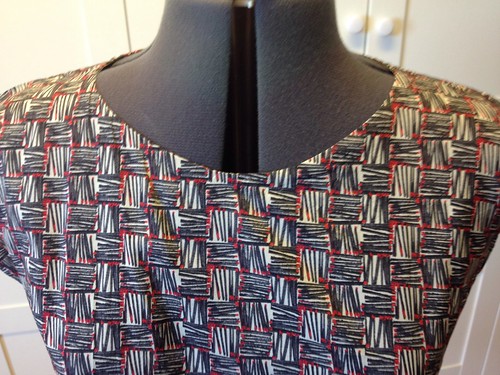 Because Tana lawn is so light, I piped the pockets: 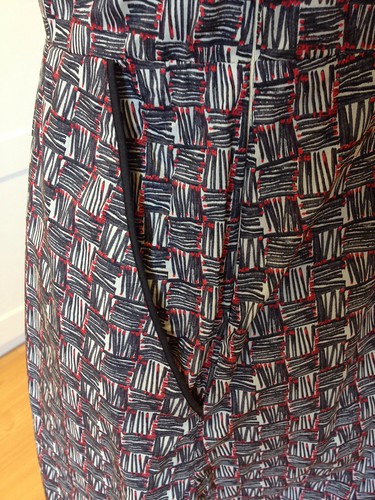 The zipper’s not terrible: 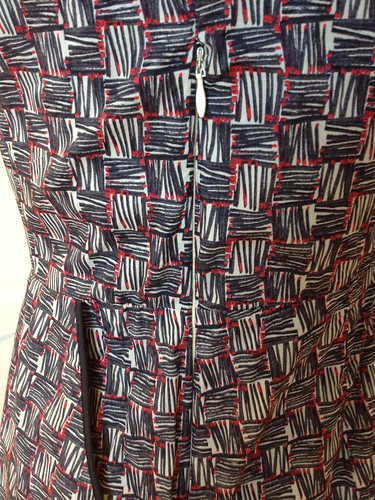 Unfortunately, this dress suffers from some of the same problems as the last version. Plus a few more, for variety!

Something is wonky with the back neck: 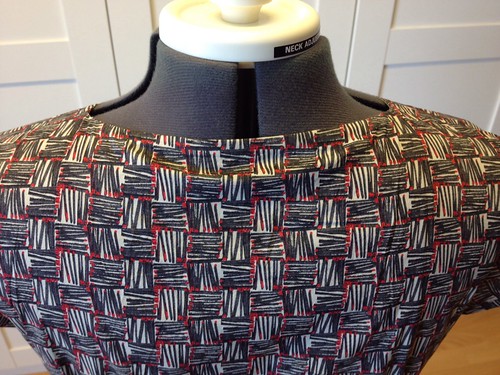 And oh lord the hem. This is terribly wrong: 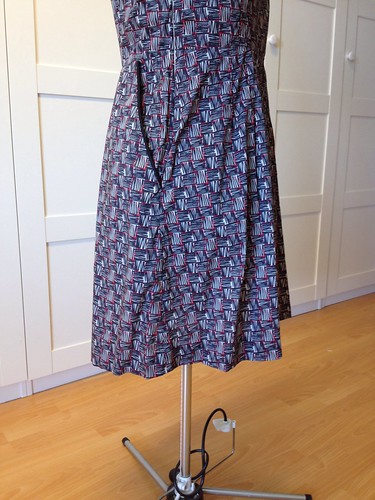 This bodice is the one from my old friend Simplicity 1577, minus the collar, plus this new heavily-altered Simplicity 5238 skirt that I am obsessed with. (You can see yet another version here.)

book, which I think will be very useful. Especially for that back hem thing, which is even slightly worse on, if you can imagine it.

I managed to take a lot of long-overdue pictures this past Sunday, so you’ll be seeing some new dresses this week!