You know how some people have a go-to little black dress, which they can wear to anything? I feel like I need a go-to costume, for the same purpose.

It's too late for this year, but I feel like this dress, made in silver lamé knit, would be THAT DRESS. Obviously, it could be any kind of Space Empress, but also you could turn it into a robot, or add some kind of tabard and be a playing card, or a knight, or any number of things. And if you did it right you would never be cold on Halloween, and you wouldn't have to worry about showing too much skin, or uncomfortable shoes, any of the other dumb things that come with costume-wearing. Silver hooded dress: the savior of Halloween. (It's almost as good as a gorilla suit!)

The jumpsuit … could also be a costume. A very, very scary costume.

This dress is even ON SALE: Jen of MOMSPatterns is having a Halloween Weekend sale of 20% off until The Witching Hour of Midnight (ET) on October 31, 2010. Coupon code is 'sewscary'. [Geddit?]

Denise at The Blue Gardenia very kindly asked me to send her information about my sewing den for her sewing spaces project … you can check it out (with some slightly-off-kilter pictures) here!

I was a little tired and punch-drunk when I answered her questions, so I apologize for exceeding your RDA of facetious answers (if you're wondering, the RDA is 3 for adults, 1.5 for children).

Here is a special bonus bad-quality cell phone picture of shoeboxes full of notions, just for you!

Not a literal MACHINE OF DEATH, thank goodness. A story anthology! (About a machine that tells you how you are going to die.)

The illustration is by the very talented Carly Monardo; here's a snippet. 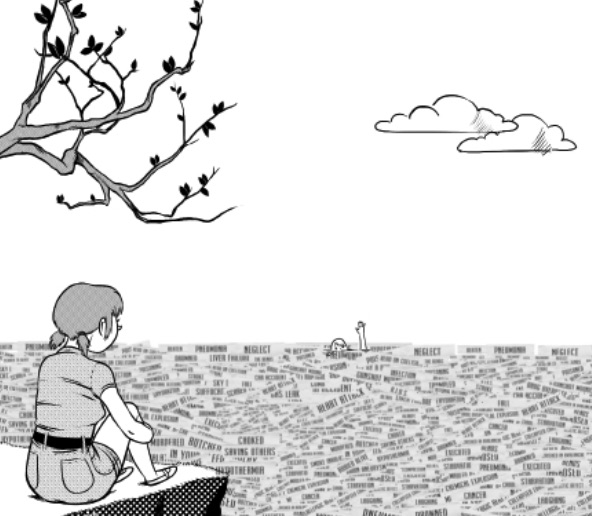 The very, very nice guys behind THE MACHINE OF DEATH would really like to get it to rank high on Amazon tomorrow. So if you like slightly morbid stories and want to read one of mine and bunch of other people's, clickety-click this link!

So George S. sent me this link to Peppermint Designs' Etsy store, and I am soooo tempted to hit that little "add to cart" button, despite never really using clutch purses, like, ever.

But it's dictionary-themed! How cool is that?

Any other dictionary-related stuff I should (or shouldn't) be looking at on Etsy?

This dress brings to mind three scenarios for me:

— Flight attendant (a trained pilot herself) manages to land plane safely after rude, chauvinistic pilot eats a bad egg-salad sandwich and spends flight moaning in lavatory. After landing, she gets his job!

In short, this pattern is made of WIN. Something about the yoke + neck scarf + jaunty pockets combo just leads to triumphs over the patriarchy. I don't know what it is.

This pattern is from Sheila at Out of the Ashes, who is having a sale this weekend: 15% off, starting today and ending Sunday night. (Coupon code is GLAMIS.) Got any entrenched jerks who need fighting?

I dare anyone who ever spent time reading British children's literature to look at this pattern and not want to spend the rest of the day reading E. Nesbit, Noel Streatfeild, or even C.S. Lewis. (Or Edward Eager, although he's not a Brit.) Preferably on the couch, under an afghan, while drinking cocoa. (Or ginger beer.)

(This could be Susan and Lucy — couldn't it? The youngest girl is always full of pluck, right? Pattern is from Tina at What I Found Vintage.)

I wish there were some kind of Tote for betting whether certain dresses will appear at awards shows. I suppose there's some kind of problem with it (e.g., enterprising starlets could back a certain designer and then make a killing by just wearing the right dress) but it would be a lot more fun than fantasy football, in my opinion.

If there were such an animal, I'd put my money on this J. Mendel gown. Jewelry-friendly neckline, interesting color/pattern, and you could actually eat some of those cocktail-hour canapés in it, no?

I'd like to see this with very strappy, very high bronze (or copper) platform sandals. And a matching clutch. But no sapphires; too matchy-matchy. Rose gold, maybe? Opals would be more interesting. (Does anyone else believe the superstition that buying an opal for yourself is bad luck? I would be draped in opals if I didn't believe this, I swear.)

You know who would look great in this? Emily Deschanel.

Back to top
A Dress A Day