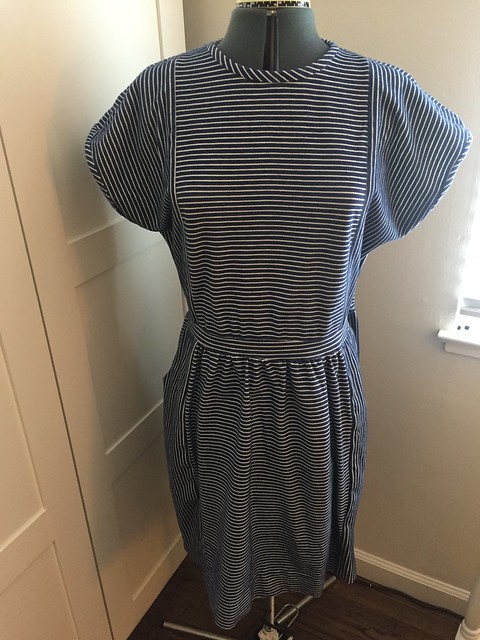 Hey, a new dress! This is the Seamwork Veronica (with the subscriber modifications, plus more than a few of my own).

Anyway, back to the dress! Obviously, I had to add pockets: 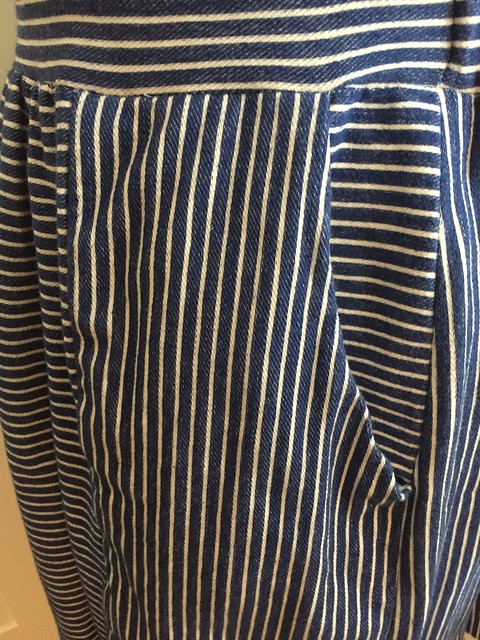 When I saw the subscriber modifications (specifically, the front panels for the skirt), my first thought was “pockets!” and my second thought was “STRIPES!”.

This fabric is a heavyish cotton knit with moderate stretch, so I fused some tricot knit interfacing to the pocket backing to keep them from pulling out of shape too much. I also zig-zagged some clear elastic along the pocket opening edge (although from this picture it looks as if I could have pulled it a bit tighter).

I added gathers to the center front and the center back to add some extra ease, and lengthened the back skirt about 3/4″ for a BBA (bubble-butt adjustment): 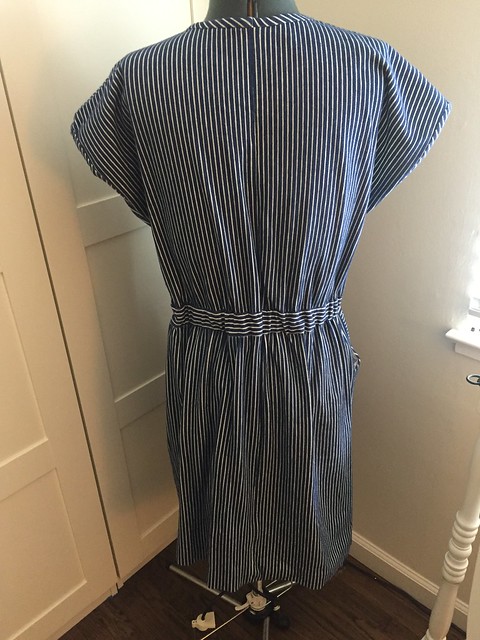 Because it’s a knit fabric I didn’t have to put in the back zipper (the dress goes on fine without one). When I make this again I might cut that piece on the fold to get rid of the center back seam entirely.

Also because this is knit, I didn’t do facings—I did bindings instead. I used my tried-and-true “eyeball it” method and ended up cutting the neck binding about two inches shorter than the neck measurement, which seemed to work fine: 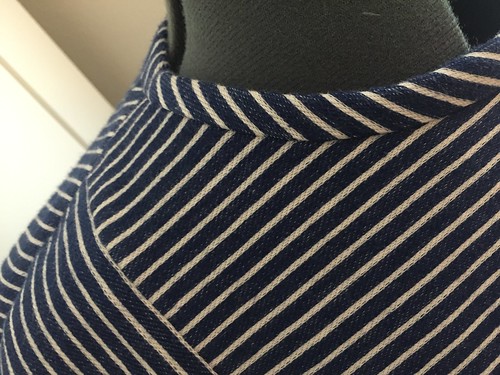 The same technique worked for the sleeve bindings: 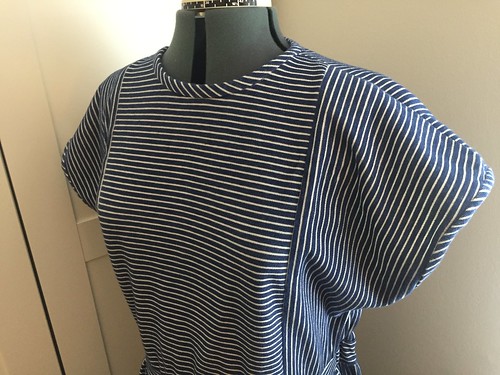 There are a few more refinements I would like to make—the waist elastic is a bit bulky (even though I used a thinner fabric for the inside casing). I might try it with sew-through elastic next time to get a more even gather. The stripes are a bit off on the front waistband—I thought about cutting it on the bias and stabilizing it with interfacing, but I was too lazy. It would have been a cool effect … Sewing the waistband was definitely the trickiest bit, especially with this fabric. I am sure it would have been easier with a lightweight woven.

The bodice could also be shorter by about an inch, because the weight of the skirt pulls it downward and you don’t get the nice blousy effect you see in the pattern photos.

I’m surprised that this worked as well as it did because the pattern is not really intended for knits (  ¯\_(ツ)_/¯ ) and I changed it *so* much. I made it in a rush because I needed a comfy knit dress for a couple of looooooong plane trips. It held up fantastically, and looked just as good getting off the plane as it did getting on.

Next version is definitely going to be a gray sweatshirt knit, possibly with piping along those front panels, and I’m also planning on making it in a blue-and-white woven seersucker (because you really can’t have TOO MANY striped dresses).

Anyone else sewn this pattern? What were your modifications?