To wit: I am hungrily awaiting the arrival of this fabric: 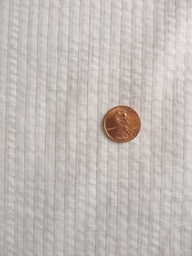 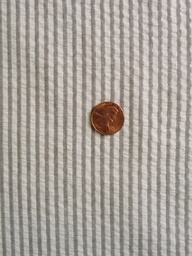 and I’m eyeing this dark-gray version, too: 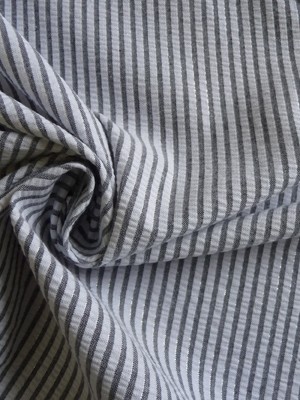 And this is despite my long-held conviction that metallic fabrics ARE NOT FOR DAY. This opinion may mark me as the oldest living resident of Getoffamylawnville, but I think that metallic fabrics in the daytime are tacky. (There — I said it. Other things I think are tacky: visible dark bras under white tops; high heels with shorts; giant designer logos … the list goes on.)

Now, just because I think some things are tacky doesn’t mean I don’t love them to death … on other people. In fact, I should probably replace the word “tacky” with “not for me.” If you rock out in your short shorts with skyscraper heels and a black bra under your white tee, carrying a bag with huge initials on it that aren’t yours, I will probably say “Damn, she really owns that look.” (Which I may or may not follow up with “Bless her heart.”) But it’s not a look I think I can own.

But maybe this fabric is a way for me to um, rent-to-own metallics in the daytime? I have absolutely no idea what I will make with this fabric (other than another 9929, thank you). Or where I would wear it. It’s not suitable for a guest-at-a-wedding dress (too white); seersucker is too casual for most evening events (and I don’t go to many fancy evening parties). The only place where I think this might be appropriate is a restaurant with an outdoor patio, for a late-night summer dinner. With a silver lurex cardigan (or a white silk one) and flat silver sandals. Which is EXTREMELY SPECIFIC, for dress planning, isn’t it?

The white-and-silver version would also look good in this dress (which I did eventually find in my size), and would be ideal for a 1970s summer disco party. Which I’m invited to all the time, aren’t you?

Where do you fall on the burning question of metallics in the daytime? What should I make with this fabric, whenever it shows up?

26 thoughts on “I just don't know who I am anymore”